The Famiglia della Riconciliazione is a Private Association of Faithful, according to the Code of Canon Law, recognized by the Vicariate of Rome, ad experimentum, on April 25, 2008 and definitively on February 5, 2019.

The Association was born, about twenty years ago, from a group of believers, driven by the urge to live the discipleship of Christ, to be with him and to be in solidarity and compassion with the men of his time [1], the whose need is strongly expressed by an Oracle of the prophet Isaiah:

This was our call. How to obey this fascinating command of the Lord? Living the founding Charism that the Church of Rome has recognized:

the integral reconciliation of man, in Christ, with God, with oneself, with others and with the goods of creation.

Members of the Association

We are Christian faithful, belonging to the Catholic Church, both consecrated-women and men, both lay-married and non-married, and priests.

We wish to witness the communion of the different vocations in the Church, in full respect of the peculiarities of each.

(The members participate in the life and mission of the Association, in different measures, according to the vocational choices of each and the consequent family orientations. Thus, community life is composed of members of common life [2], oblates and friends. One of the sisters, after a few years in coenobium with the others, became a hermit, the latter and the cenobites are called Missionaries of Reconciliation. All, according to their life choices and possibilities, participate in the formation and activities of the Community).

Works: in the twenty years of the Community’s life, we have met many people. We don’t like talking about numbers, when it comes to brothers, but perhaps in this case it is right and appropriate to say that, thanking the Merciful Lord, we think in terms of … Really many! Some occasionally and / or irregularly, others more continuously, certain also in residential form, welcoming them with us at home, for longer or shorter periods.

In the final approval decree, Cardinal De Donatis writes that “the work has produced many fruits of grace for many souls”…

Divine Providence wanted to make us meet suffering people, involving our lives with theirs, effectively, allowing us to sit as students at the teacher’s post of the Little and Poor. We would almost like to write the names, but it is not possible … However, it can be used to participate in our journey, to present the order of problems we speak:

People that have been life-threatened have taken refuge with us, such as, for example, an entire family, whose father had escaped from a dangerous and powerful organization. After following them spiritually, these brothers have encountered faith and forgiveness of God so, in agreement with the Bishop, we provided for them their needs (food, lodging …) and fraternal life with us, in a space reserved for them. Aided by the charity of friends, we were able to go on this way for four years, until things got partially calmer, so then they were able to slowly re-enter a “normal” life, with their own work and a home.

We would have many stories to tell …!

In addition to these “harder” realities we always have daily encounters with people who come for our catechesis or just to talk, to pray, to train and even to celebrate.

We have been even able to offer an important service to priests, to religious and to lay men and women for many years such as Spiritual Exercises.

In addition, we accompanied, with the method of the “Catechesis of the Good Shepherd”, several children and young people to the sacraments of First Communion and Confirmation. 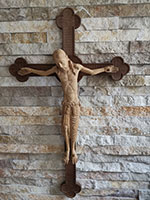 – We took care of the formation of couples at Christian marriage.

– We have been close to the sick and the elderly, whom we have also hosted.

– We live and offer the joy that comes from our Liturgical Choir!

In short, we offered what a small church is called to live with simplicity.

With particular attention to the teachings of the Social Doctrine of the Church, we have conceived, created and managed an art and crafts workshop for ten years, called L. a. B. –Labor ad Bonum- (etching and painting works on copper, stoneware and porcelain), behind which there is great study and research especially by the consecrated sisters.

From the Laboratory was born “Grazie al Cielo”, a “network” project between Monasteries, Convents, Missions, Social Cooperatives and craftsmen, which we also coordinate and cooperate with.

We pay particular attention, so that the products that we produce ourselves and also those that we sell made by other subjects are manufactured without exploitation of the workers and in respect of environmental resources (pollution, origin, etc.), for the safekeeping and development of the dignity of people and for the care of the “common home”, which is our planet.

Referring to the Social Doctrine of the Catholic Church means engaging in the realization of work projects built on solidarity, communal and subsidiary economy.

Thanks to the skills of the members of the Association, we provide theological training courses of counseling, work orientation, entrepreneurship and work planning : 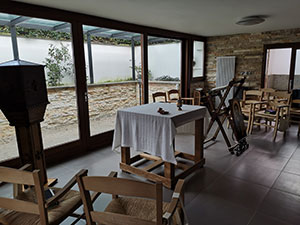 We ask your help.

The community today has about sixty people.

The central nucleus, that of the cenobites, lives in a common structure, albeit in separate housing realities by vocations and by sex (consecrated and married).

We would like to extend our welcome and our service, taking advantage of skills and experience.

The idea of opening training workshops in the various subjects we can offer, art, cooking, horticulture …

Places for the growth and “care” of young and old, through work, fraternity and prayer.

The “dream” of starting a restaurant and party place, which reflects the spirit of hospitality and familiarity, to be managed with those in need or who have to start a new life …

We are thinking of a house / structure / institute, which allows us to continue and develop the path and where to build the small “City of Reconciliation“, which we feel called to build for the common good: that “very concordant and orderly society whose members they enjoy God and each other in God“. (St. Augustine)

Where ? In Rome or in the “Roman countryside” (that is, in a “strip” around Rome), because in Rome we have the job, the apostolate and the members of the Family of Reconciliation.

Why ? “The messianic people, while not actually understanding all men, and sometimes appearing as the small flock, constitute for all humanity a very valid seed of unity, hope and salvation. Constituted by Christ in a communion of life, charity and truth, he is also taken by him to be an instrument of the redemption of all … “. (Lumen Gentium 9) 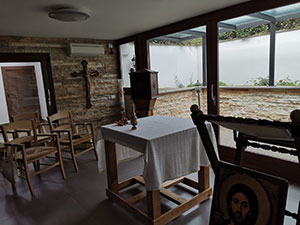 In these years, we have worked hard, without sparing ourselves, as many do for their family. We prayed a lot, wept and rejoiced by working hard to live the commandment of love and forgiveness. The Lord Jesus, who revealed the Father’s things to the little ones (cf. Mt 11.25), has used our smallness and we are well aware that whatever good we may have achieved has been possible through the action of Grace.

When in community, every day, we celebrate Holy Mass, when we sing the Liturgy of the Hours, when we pray in silence, we do it in the heart of the world for all men. We are asking you for help also for this.

By living in fraternity, we can be a seed of peace and also a familiar place of welcome for anyone.

Added to this is the need to work to live and to operate, with many experiences, systematizing new social aid projects.

Time is greater than space: this teaching of Pope Francis pushes us to commit ourselves to intervene, yes, on emergencies, but also to “start processes” that lead to forming a new mentality to build a true “civilization of Pentecost”.

We need friends who share the concreteness of this dream of grace.

FIND OUT HOW TO HELP US

Friends in Heaven.. We entrust everything to the Holy Virgin. We ask with you the intercession of our Patron Saints Teresa of the Child Jesus and Ignatius of Loyola.

We ask for you and for us the blessing to those who have taught, supported, encouraged, corrected us, who have helped us to discern the will of God and who are now in His sight. Among all, we remember in the Communion of Saints, the Holy Mother Teresa of Calcutta, the Bishop Salvatore Boccaccio, P. Jesùs Castellano Cervera, Don Giancarlo Gramolazzo.

[1] “The joys and hopes, the sorrows and anxieties of the men of today, of the poor above all and of all those who suffer, are also the joys and hopes, the sadness and anxieties of the disciples of Christ, and there is nothing more genuinely human that does not find an echo in their hearts. Their community, in fact, is made up of men who, gathered together in Christ, are guided by the Holy Spirit on their pilgrimage to the Kingdom of the Father, and have received a message of salvation to be proposed to all. Therefore it feels truly and intimately united with mankind and its history”. Gaudium et Spes 1. 1.

[2] The members of common life, or rather of communion, live as cenobites, in the same “house”, although occupying differentiated living spaces, based on the states of life – marriage and consecration of life – and sex – consecrated women and men. They have assets in common, taking into account the special needs of their children, when they exist and the needs of each. Furthermore, according to the Community Statute, Vows – the consecrated – and Promises – are married, wishing to witness the communion in the Church between the different States of Life (Consecration, Marriage and Priesthood).

HOW TO HELP US

We need your help to support this project of “reconciled work” with God, with the brothers and with the goods of the creation and construction of the house of our community.

If you want you can make an offer. This is our reference: